“I created the OASIS because I never felt at home in the real world. I didn’t know how to connect with the people there. I was afraid, for all of my life, right up until I knew it was ending. That was when I realized, as terrifying and painful as reality can be, it’s also the only place where you can find true happiness. Because reality is real.” 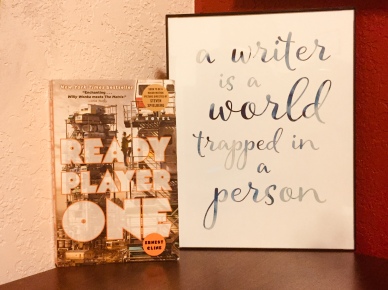 Since the movie is coming out next March, I had to read the book.

The trailer doesn’t give the book justice. It takes place in the OASIS most of the time, which is kind of like inside a MMO. But the creator of the OASIS dies, leaving an Easter Egg to find in the server. The Easter Egg – filled with riddles – stumped everyone for years until Wade Watts uncovers the first part. Players from all over get interested in him – even players that want to kill him for it. Wade has to race to the end to get the Easter Egg.

80s and game references fill up this book. If you like either of those, you’re almost guaranteed to get entertained. Most people read this book for the nostalgia. It’s great at getting non-readers reading.

But, as always, there’s need for improvement. As many people have pointed out before, the characters could develop more. Art3mis and Aech (Wade’s friends) don’t have too much development. Aech, with his spoiler at the end, gets waved off almost and not explored. Other characters have even less development.

Another flaw is the number of references throughout the book. Even in the OASIS, it’s piles of references one after another. The whole book is more of a collaboration of other people’s ideas rather than an original one. The original idea – a torn up Earth and the OASIS – could have been developed more to get into how life had become that.

Overall, I like the book. Two people recommended this book to me. I liked most of the references throughout. It feels more modern than futurist, which I enjoy. It has a good pace too, going through all the different riddles for the Easter Egg. I would recommend this book.

I just wanted to let you know that I offer copy editing and proofreading services! The first couple of pages are free, so you can get a sense of my editing style. You can message me for more details.

Have a great day!