“That’s not the spirit of the law, Emma. Remember? The Law is hard, but it is the Law.”
“I thought it was ‘the Law is annoying, but it is also flexible’.” 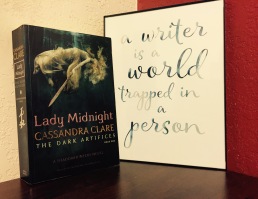 As Cassandra Clare always does, she brings readers back into her Shadowhunter world. Once you start reading her books, it’s difficult to stop. (If you haven’t read her books before, I suggest reading City of Bones first.)

Lady Midnight, the first book in the The Dark Artifices trilogy, follows the story of Emma and Julian. Despite being told to stay away from anything that involves the faerie, Emma investigates a series of murders that involve the faerie. She does this because the murders resemble how her parents died. More complex events follow including Mark, a boy trapped in the faerie’s Hunt, making an appearance.

But, Cassandra Clare, even as great of a writer she as she is, does have her own faults.

One of the biggest issues with this book is the names. Tavvy, Tiberius, and Ty. Keep in mind that Tiberius and Ty are the same person. Tavvy’s real name starts with an O. All four names get interchanged throughout the book.

If those two got confusing, remember that the main family has six kids. That’s not including Emma, Cristina, Authur, Diana, Diego, Malcolm, and a few others. I want to stress that all these characters play an important role. It’s crazy how much of a mastermind Cassandra is to make each character have a purpose. Even so, it’s difficult to keep up with them all.

The first chapter confused me a bit too. It is through the eyes of Kit, who comes into importance later on, but he gets introduced first. When he found Emma in the first chapter, I thought he would befriend Emma and join her. I got into his character. I wanted to travel with him and fight some demons, but I got…nothing. He’s not mentioned again for the longest time. About halfway through the book, I skipped through the pages just to see if he would show up again. Getting close to a character that I’d almost never see again was confusing. Sure, he’ll be there for the second book, but I wondered where he was throughout the first book.

Despite the faults, this book is amazing. As always, I’m blown away with how much detail there is about the Shadowhunter world. This story brings magic, fairytale creatures, and monsters into modern-day Los Angeles. The pace of the book is great with tons of humor and plot twists around every corner. It’s a huge book, but it’s an awesome story. I highly recommend it.

I just wanted to let you know that I offer copy editing and proofreading services! The first couple of pages are free, so you can get a sense of my editing style. You can message me for more details.

Have a great day!